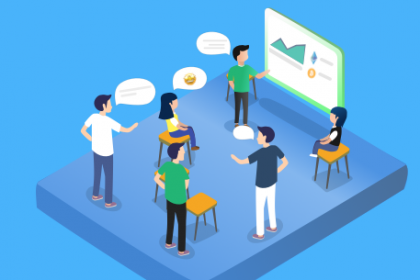 More than 40 years ago, a love story began. Pradyumna Kumar Mahanandia was born in a remote village in India 1949 . According to a prophecy after his birth, he was meant to marry a woman from a far away country. The prophecy became true when a woman asked Kumar to draw a potrait of her. It turned out that the woman was the one refereed to in the prophecy. Kumar proposed to the woman and they spent some time together. The woman went back home in Sweden and they were apart for a while. 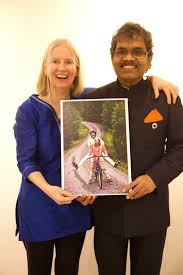 Kumar did not let go of their love. He decided to cycle from India to Sweden which is 6,000 miles after he sold all his belongings. Kumar went on his trip taking stop overs where he would show people his drawing of the woman and narrate that he was determined to get to her.

From this story we can clearly see that Kumar decided to cycle 6000 miles,day by day to reduce the miles between him and his lover by conquering his own thoughts and sharing his story with people he met on the way.

Scrum is a simple framework that is used to deliver a working software in sprints. A sprint is a time box. It has a start and end date.

Scrum has three roles. These are :the product owner, the scrum master and the team members.
The product owner takes care of the backlogs where they ensure that every least desirable outcome users expect from the product are met. Essentially they deal with the clients.
The Scrum master is the facilitator of the team. Helps team members to follow Scrum rituals and effectively use Scrum artifacts.

Product backlog, Sprint backlog and Burn down charts are some of the artifacts used during sprints.
Moreover, scrum has its own ceremonies(rituals) which are Sprint planning, Stand-up, Sprint review and retrospective.
Stand-up is a daily routine where the members report what they achieved yesterday, a report on what they are planning to do today and what are some of the challenges that they are facing while completing their tasks.

Codepamoja team members have been writing technical blogs that focus mainly on understanding java as a programming language. Some of the topics we’ve been able to discuss are: Learning java both in windows and linux, Operators used in java and many more.

We participated in a brown paper session which was done in four steps. Which are:
I. Showcasing demos we’ve done so far and knowledge/skill gained.
II. Sprint retrospective.
III. Goals achieved.
IV. Ideas to improve ourselves as a team.

Preparations before carrying out a brown paper session.
1. Secure a working environment that allows you to hang paper from a wall. For example a conference room. In our case we used a campsite.
2. Obtain supplies such as Sticky notes(different colors), masking tape, brown paper/white paper(size A0), pens, markers and scissors.

STEP 1:
Each team member has to write their demo on a sticky note. In our case we decided to use three points each. Note that each point should be on its own sticky note. 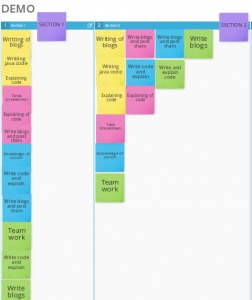 STEP 3 :
Re-arrange the sticky notes that are similar in one line vertically. For example, Steve’s points on Demo were:

STEP 4 :
Checking the points that have the same similarity after following Step 3. 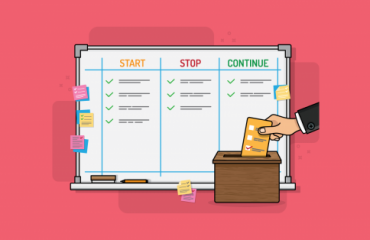